In Studio or On Location?

For shooting commercials and working on other video projects, the use of a fully functional studio may be preferred to going somewhere on location.  The determination between the two will come some time in the planning phase when you solidify what the guts of project will look like.  By the guts, i mean a rough outline of the video project that includes a plot, a general idea of a shot list and what sort of thematic quality your production might take.  Once you get an idea of this, it is going to be easier to determine what kind of conditions you will need to make your video production worth every penny.

If you determine that the bulk of your project will be done relatively statically, then choosing the studio option will probably be the better fit.  The main benefit of a in studio production vs an on site production is that the ease of filming is considerably higher.  From a technical point of view, it’s going to be much easier to start and end production every day if all the equipment is relatively permanent. On top of that, when changes are necessary, adjustments will be very easy to carry out compared to being on site somewhere.  In the end, this saves money because you are in a static environment with very little impact from secondary production variables.  You don’t have to worry about setting up lights out in some windy field, or worry about protecting your equipment from the elements.  This ultimately comes down to time savings leading to more actual shooting time and in turn maximizing your resources. Remember, this doesn’t mean that shooting in a studio is exclusively better than working on site on location. It all comes down to what fits the style and theme of your video.  This also means that the two ways of filming are mutually exclusive. You may find yourself intermixing both on location and studio filming to get a desired combination that accentuates the message of your video.

I’ll run through a reasonable scenario that would apply to the three instances:

For example, say you are producing a video for a fortune 500 company.  The video is to be shown at an annual shareholders meeting.  The purpose of the video is to inform the shareholders about the recent financial performance by the company.  This would be an instance where shooting in a studio might be a better option.  The focus of the video is to communicate information and data, not to put forth the best possible scenic arrangement.  This is a situation where it is beneficial to have as many few voices as possible to keep the focus on the information and data.  This would also be a similar reason why not to shoot at a remote location.  The remote location might offer some visual enhancements but ends up not progressing the storyline and main plot.  In this scenario, it would seem that going on location would add costs to the shoot without a concrete reason for doing so.

Conversely, we can think up a scenario where the use of a studio might be too static.  This applies to examples and situations where the scene and images that we see on screen are just as crucial as the information being conveyed by the dialogue.  For example, say that you have been contracted to complete a safety training video for a new safety technology company.  The video will detail the installation and use of the piece of safety technology.  The purpose of the video is to train their technicians the proper instrument installation procedures.  The video will have to show clear instructions as well as the necessary ancillary information for the technicians.  This is a situation where it is crucial to be somewhere that the information and techniques can be described and demonstrated in a very clear way.  For this type of video, going on location to a location that has the capability for you to convey to the necessary information is beyond crucial.  This is something that is incredibly hands on, and without direct visual cues to the viewer, the effectiveness of the video can feel a significant reduction. 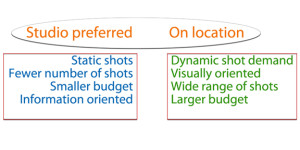 We can also think of a situation where a combination of both would be a good idea.  In this scenario, we can imagine a project where a client wishes to promote a new charitable project.  The project involves doing a commercial for an organization that is trying to promote urban farming.  The video will include the technical specifications for urban farming as well as a tour of existing farms.  This is a place where it important to get all the technical details out as clearly as possible while accentuating the emotional ask of the video by going on location.  To do this, it wouldn’t be a bad idea to intercut both in studio and on location filming.  There are a certain amount of technical details you need to express, but beyond that the video becomes a visual showcase, which would be best done by finding a suitable place in which to film in.